Dating giant Match Group announced a series of changes to Tinder’s management team alongside the announcement of disappointing second-quarter earnings on Tuesday. Notably, Tinder CEO Renate Nyborg will be departing the company after less than a year in the top job. Match Group is also killing Tinder’s plans to adopt new technology, like virtual currencies and metaverse-based dating.

In a shareholder letter, Match Group CEO Bernard Kim expressed frustration with Tinder’s current performance, noting the popular dating app has not been able to realize its typical monetization success over the past few quarters and is failing to meet the company’s original expectations for revenue growth for the latter half of 2022.

Kim chalked up Tinder’s troubles to “disappointing execution on several optimizations and new product initiatives,” but added that Tinder’s product execution and velocity could still be improved.

Alongside the departure of Nyborg, Tinder will have a reorganized management team that also includes:

Kim said he will oversee the team while Tinder searches for a permanent CEO.

Reading between the lines, there was also a hint that the younger generation of users may have lost its appetite for dating apps like Tinder — a culture shift which can’t just be chalked up to lingering pandemic impacts. The letter notes that people have moved past COVID lockdowns and re-entered “a more normal way of life,” but their willingness to try online dating apps for the first time hasn’t returned to pre-pandemic levels.

Instead, Match Group reports that its highest engagement is now coming from existing users.

As part of Tinder’s revamp, its “dating metaverse” ambitions have been dramatically scaled back. The company had been planning to leverage its Hyperconnect acquisition to create a new form of online dating in a virtual environment, but those ideas are on pause as Match Group now has to address broader issues.

“…Given uncertainty about the ultimate contours of the metaverse and what will or won’t work, as well as the more challenging operating environment, I’ve instructed the Hyperconnect team to iterate but not invest heavily in metaverse at this time,” wrote Kim. “We’ll continue to evaluate this space carefully, and we will consider moving forward at the appropriate time when we have more clarity on the overall opportunity and feel we have a service that is well-positioned to succeed.”

Also on the chopping block was virtual currency, which Match Group was experimenting with as Tinder Coins. (While Match Group hadn’t gotten so far as to announce blockchain integrations for the coins, the virtual currency’s role in its broader metaverse plans suggested crypto could be part of its long-term roadmap.)

“After seeing mixed results from testing Tinder Coins, we’ve decided to take a step back and re-examine that initiative so that it can more effectively contribute to Tinder’s revenue,” said Kim. “We also intend to do more thinking about virtual goods to ensure that they can be a real driver for Tinder’s next leg of growth and help us unlock the untapped power users on the platform,” he added.

On an investor call, Kim admitted the Tinder Coins product was not launched in a logical way as, normally, a company would first create demand for virtual goods and collectibles before rolling out a currency. He described the decision to pause the efforts with Tinder Coins as “frustrating,” but important in order to get things right. The company shared no timeframe to a relaunch, and instead is focused on launching new short-term subscription in the fall.

The company said it’s still planning to develop features to make Tinder more appealing to women, including a subscription-based package that will provide “curated recommendations” as well as features designed to get friends involved in introductions. Across other products, it will also look to new features, like livestreaming video, to drive adoption.

Overall, Match posted Q2 2022 revenue of $795 million, up 12% year-over-year, but below average Wall Street estimates of $804.22 million. It also posted a loss of $31.86 million, or 11 cents per share, versus 46 cents in the year-ago quarter. Analysts were expecting earnings of 57 cents per share. Match said its operating loss was $10 million, impacted by a $217 million write-down of intangibles related to lower financial outlooks for its Azar and Hakuna apps from Hyperconnect.

Match Group paying users were up 10% year-over-year to 16.4 million. Tinder direct revenue grew 13% from the prior quarters, driven by 14% growth to 10.9 million paying users. 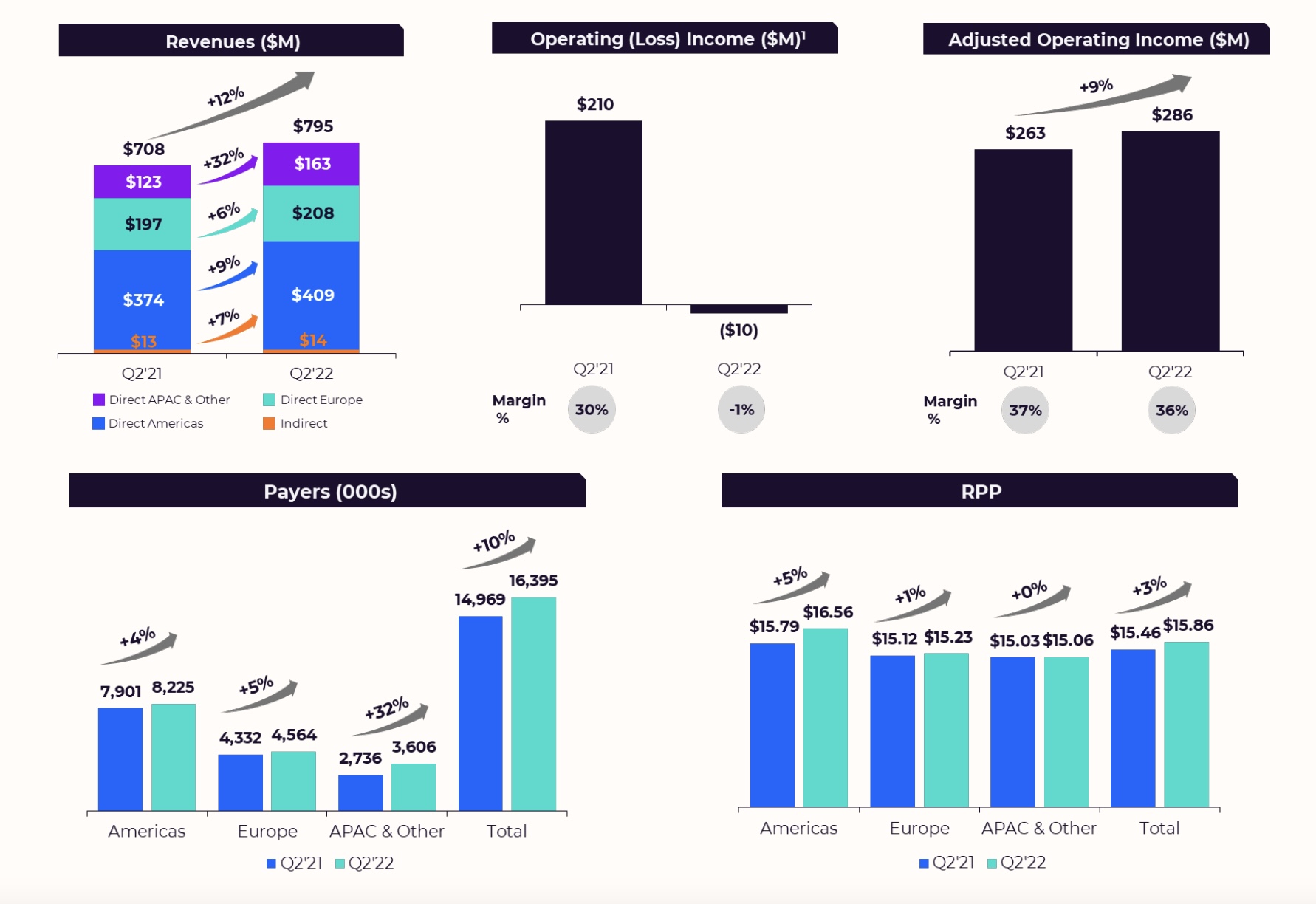 Estimates for the quarter ahead weren’t good either, with Match Group forecasting flat Q3 growth to $790 million to $800 million in revenue, below estimates of $883 million. Tinder revenue growth is expected to be in the “mid single digits.”

Shares dropped more than 20% in after-hours trading on the news.

Updated 8/2/22, 6:00 pm ET to clarify Tinder had not formally announced blockchain integrations for Tinder’s virtual currency. 8/3/22, 1 pm ET with a comment from the investor call.