The first week of 2022 is starting off rather dramatically for Bitcoin and the rest of the cryptocurrency market, the total capitalization of which is down about $240 billion in seven days. This comes as the US Federal Reserve revealed plans to start reducing its balance sheet, which may start as soon as the next several months.

It’s safe to say that the Bitcoin price has seen better days. Down about 12.5% since this time last week, BTC currently trades at around $41,400. For the majority of the time throughout the past seven days, the cryptocurrency was chopping sideways, but then on January 6th, things took a turn for the worse when the price dropped towards $46K. Bears weren’t done yet, and today the price seems to be headed lower, having dipped below $41K.

Elsewhere in the cryptocurrency market, though, things are looking more promising and optimistic. The space of non-fungible tokens (NFTs) continues to boom with a recent announcement of Samsung diving in. The tech behemoth will be entering the metaverse through the popular project Decentraland (MANA). OpenSea – the biggest NFT marketplace – closed yet another funding round which brought its total valuation to a whopping $13 billion, clearly demonstrating the investors’ appetite.

In any case, it’s very interesting to see how things will shape up in the coming days and in 2022 altogether. Will we see a deeper correction, or will the industry grow even more than in 2021? Only time will tell. 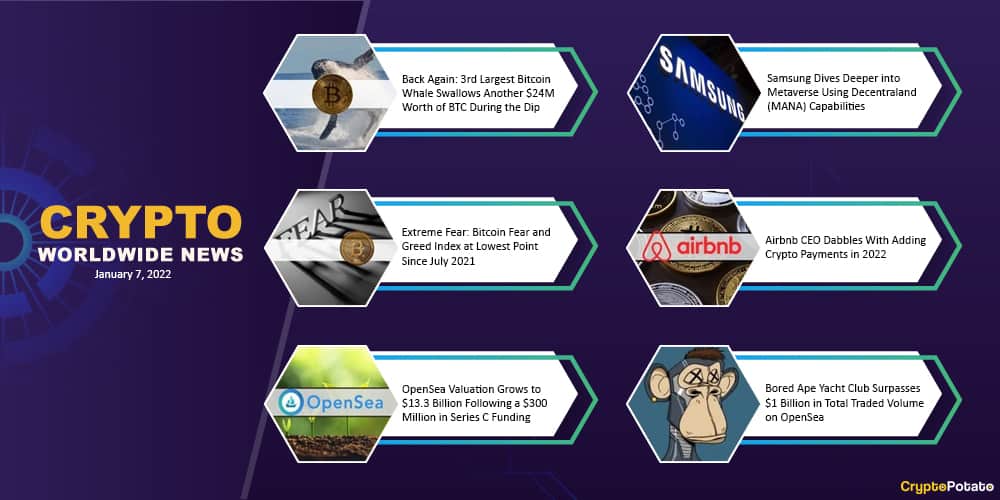 3rd Largest Bitcoin Whale Swallows Another $24M Worth of BTC During the Dip. The third-largest Bitcoin address has bought another 551 BTC while the price was declining at an average point of $45,219. This week alone, the entity has accumulated over 1,000 BTC.

Samsung Dives Deeper into Metaverse Using Decentraland (MANA) Capabilities. The Korean-based tech giant, Samsung, has introduced a new feature that would allow its clients to attend live music events virtually through the metaverse. In doing so, the company has chosen Decentraland to build its venue.

Airbnb CEO Dabbles With Adding Crypto Payments in 2022. The CEO of Airbnb took it to Twitter to find out any potential features that its customers want to see launched in 2022. The majority of respondents said cryptocurrency, and the high-ranking executive teased potential integrations.

OpenSea Valuation Grows to $13.3 Billion Following a $300 Million in Series C Funding. OpenSea – the leading non-fungible tokens (NFTs) marketplace – has raised $300 million in a funding round led by Paradigm and Coatue. This puts the company’s total valuation at $13.3 billion.

This week we have a chart analysis of Ethereum, Binance Coin, Cardano, Solana, and Luna – click here for the full price analysis.